Blerd Dad and the Force Awakens 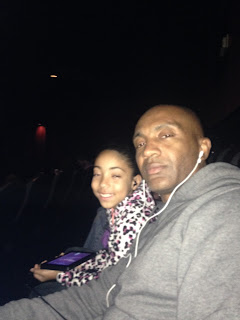 The Producer is also a Blerd Dad.  For those of you who have kids my age( 9 and 10) or a bit older, you know getting out to do anything can be an adventure( and not always in a good way).  This is my adventure to just get to see the Force Awakens.  No spoilers or movie review here.  Just a dad sharing a life long passion with his kids.

If you have been reading this blog and/or listening to our podcast, you would know that I/we are all huge Star Wars fans but I had been holding down my excitement for this movie based on how hard I got burnt on the prequels.  I had my concerns on how they were going to meld the new and old characters together in a way that did not seem like pandering to the "old" Star Wars fans.  I had concerns about how "old" Star Wars fans would take to the new leads in Star Wars and if we could/would give a damn about the new characters.

Now my kids are "New" Star Wars fans.  Of course they have seen the movies. We have watched them numerous times, but their interest in Star Wars is more rooted in the Clone Wars and Star Wars Rebels cartoons.  They like the movies...kinda, sorta. They watch them, but most of their understanding, or lack of understanding, is based on their knowledge of those cartoons.  They play with their Star Wars toys sometimes. They are just kinda lukewarm to the franchise and, honestly, thats probably because of me.  I do not force things I like onto my kids- besides making them cheer for the Bengals.  They need to like what they like and I need to learn to accept it( as long as they don't cheer for the Steelers- I'm good).

So leading up to the release, I been kinda out of it. When the new toys went on sell, I didn't even bother buying anything.  When pre-tickets went on sale, I let it slide.  This is totally not like me. Before Episode 1, I bought my tickets weeks in advance and hid them in my Bible thinking if someone broke in, they could steal the tv, but don't fuck with my Star Wars tickets.  Before Episode 1, I took off a day from work to go to different stores to buy Star Wars figures and proudly showed them off to co-workers when I came back to work the next day. But for The Force Awakens, as the release date got closer, I pretty much ignored all the tv spots and I watched the trailer a normal amount of blerd times( like 3).  I was suppressing any level of hype ahead of this movie.  My kids were feeding off me. They watched the trailer, but since I wasn't hype, they wasn't hype.  Of course we was gonna see it, but we were thinking more opening weekend, not opening night.  There was even talk about waiting until the Monday to let the hype die down before seeing it.

When we got to release week and more and more people were talking about seeing the movie, I started to think, I need to see the movie sooner than later because the internet has no chill on spoilers.  So just random, I started looking to see if any midnight showings were still open.  Now I have not been to a midnight since the Batman shootings in Colorado. Now that I have kids, the idea of dying just to say I saw a movie first made no sense.  As I searched theaters, all midnight and late night shows were sold out, but I found plenty of Thursday night showings.  Now me, being me, and you would have to know me to know what that means, did not purchase the tickets right away. I looked at them, consulted with others from @brothascomics, consulted with the Mrs, posted on FB what should I do.... I am just not an impulsive person when it comes to purchases.  In my consultation time, I lost tickets to a 7:00 PM and an 8:00 PM and both shows sold out. Now I was shut out again and was thinking, "man, somebody gonna spoil this movie for me before I can see it".  On top of that, me being me, I told the kids we were going to see it Thursday and now I didn't have any tickets. I could see the therapy my kids would be paying for because their dad promised to take them to Star Wars but didn't.

Then I checked the movie theater that you go to ONLY because its showing something you want to see.  The Regal Cinema in Kennesaw is that theater for me.  Its just kinda old, its super over priced, and the popcorn is terrible.  Regal had a 9:30 PM and after consulting ( again) with the Mrs., I purchased the tickets for us and our 2 kids.  I did this on Tuesday night!  And not surprisingly, my hype level went way up.  Like I was having a hard time sleeping.  Plus, sharing Star Wars with my kids on the big screen had me in my feelings.  It would be their first late night, opening night( on a school night),  experience.  This made me emotional in a way I did not anticipate.  The only other time I felt this way was when I took my kids to see Toy Story 3!

As we got closer to Thursday, the hype level in the house was building.  My daughter wanted to watch Return of the Jedi to refamiliarize herself with what we were about to see.  My son told all his friends that he was going to see the movie Thursday and damn near got in a fight at school because kids thought he was lying because the movie didn't come out until Friday. 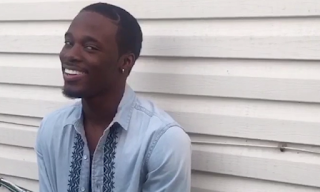 Thursday came and the Mrs bailed feeling that she would fall asleep during the movie( she would have) and so it was just me and the kids.  My daughter has dance on Thursday till about 6:30 PM and I was gonna head to the theater by 8:30 for the 9:30 show. My wife suggested leaving around 7:30 PM and she was 100% correct.  When we got to the Regal, lines were everywhere for the many different showtimes and we were not sure what line to stand in.  In Regal Cinema fashion, no one was around to let you know what line was for what showtime. I went inside and found a manager and he told me that they already began seating for the 9:30 PM- it was 7:55 PM.  They had opened seating 2 hours before showtime.  So the kids and I blow through the line( damn some nasty ass popcorn) and catch seats on the top row, left of center.  Theater held about 200 and at 8:00 PM, I would say about 150 of the seats was already filled.

Again my kids are 9 and 10 years old- having them sit for 90 minutes in the dark with nothing to do would be a parental suicide. But being Super Blerd Dad, I had packed their tablets and they were able to game and Netflix the time away waiting for the movie to start.  As I put out in my tweets that night, no one in the 2D showing was dressed up.  This totally surprised me. I figured someone or many someones would be dressed up as Jedi but not one. Security was also lacking. As we went in, no one searched my bag.  All I had in there was a Pepsi and two Kindle Fire's.  But they didn't look to make sure I didn't have a gun in there and that scared me once we got seated.  Plus the cat we was sitting next to, was sketch at best( I never trust men who go to the movies by themselves).

Naturally, my kids want snacks and I'm faced with that parenting dilemma of getting up and possibly losing our seats to the late arriving crowd or leaving my kids with this potential To Catch a Predator dude sitting next to us.  I rolled the dice hoping that dude was on his 2nd strike and that my kids "Stranger Danger" lessons from school would kick in if anything popped off.  I ran out to concessions and the line was not that long, but for some damn reason, people  are still confused about what they want to order at the movie theater.  Get popcorn or nachos and a drink and sit the fuck down!  I ordered 2 combos( popcorn and nachos, duh) and that shit was $26.  Whatever.  I run back into the theater and made sure dude ain't try to touch or proposition my kids and waited out the last 20 minutes before the movie began.

I wrote about the trailers in a previous article but once the lights go dark and we knew the movie was about to begin, I felt this sense of excitement that I had not felt before.  My daughter was so excited, she clutched my arm like she does when we are in a crowded park or store.  And when that John Williams theme hit, I began to cry. I could not believe that 32 years ago, I saw Jedi in the theater and now I am seeing The Force Awakens with my own kids.

Now without spoiling the movie, when its over, even around midnight, my kids are hyped. My kids are biracial( their mom is Latina).  My son was all about Finn and Poe and I was so excited for him ( and myself) to see someone who looked like me( us) and for him to be the hero.  And my daughter was all about Rey for the same reasons.  It doubled my enjoyment of the movie for them to see themselves on screen-something that was so rare in sci/fantasy when I was growing up. And of course they want to see it again! We tried to see if after church on Sunday and both showings we wanted to go to were sold out!

Now of course, days before Christmas, they want all the Finn and Rey toys and they are not easy to find. They want The Force Awaken pj's and posters and because I suppressed all my hype, I did not buy any swag ahead of time and now its all sold out.  Maybe Santa will hook them up!

In short, if you love Star wars and you have kids, sharing this experience with them will probably get you in your feelings when they drop the lights and you hear that music.  Enjoy it because moments like these are what makes being a blerd dad special! 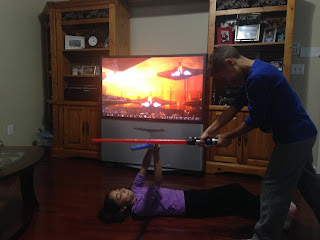 Posted by Brothascomics at 12:44 AM