Issue 142 picks up right up at the end of issue 141.  The Xmen begin their battle with the new Brotherhood of Evil Mutants with the hopes of saving Senator Kelly and changing the future that Kitty Pryde described to them( by the way, the year the Sentinels took over was 2013). Meanwhile in the future, the remaining Xmen are planning an attack on the Sentinel headquarters with the hopes of heading off a nuclear war! 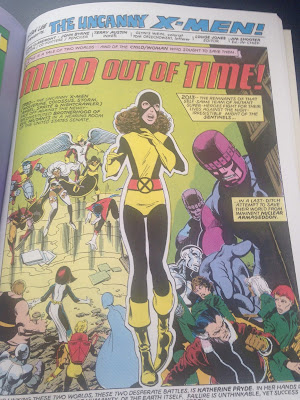 The battle between the Xmen and the Brotherhood is fierce. This is Storms first battle as leader of the Xmen and she is doubting herself- Is she as good as a leader as Cyclops was?  For now she cannot figure that out, but she is doing her best to get the team through this battle. 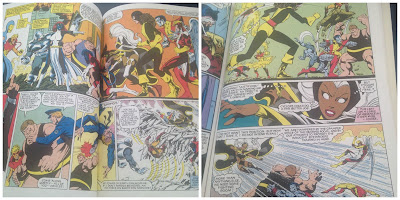 Meanwhile in the future, the assault on the Sentinel facility at the Baxter Building continues.  The remaining team: Wolverine, Storm, Colossus, and Rachel( Summers) make their way to the building with a sense that this may be their last battle together. 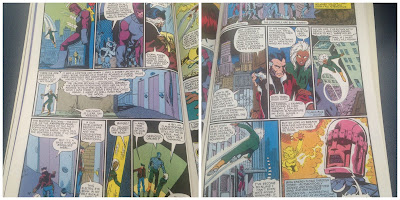 In the future, the battle rages on.  The Xmen are losing and Storm is doing her best to keep the team together. The team begins to shift their strategy and when Wolverine wants to end Pyro's life permanently, it leads to this wonderful exchange between the new leader of the Xmen and its most volatile member.  Its weird he gives Cyclops props as a leader because he ran down Cyclops so much when he was the leader of the team. We also get the seeds that Mystique is Nightcrawlers mom which is not revealed until about 20 years later. 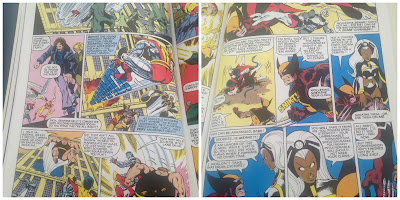 The book shifts back to the future for the final battle.  The team is detected almost immediately by the Sentinels and their attack is blunted from the start.  It leads to that great graphic of Wolverine being obliterated by the Sentinel and only leaving his adamantium skeleton on the ground.  This leads to Storm and Colossus leaping into action and we see Storm killed and how it affects Colossus and sends him into a rage that plays off panel but we read it through Rachel's thought box all the way through his death.

With the future Xmen all dead, its up to to the present day Xmen to save Senator Kelly.  The Brotherhood has been defeated but they still do not know where the senator is.  Mystique has shaped changed into his secretary and had the pre-cog Destiny look after the Senator to kill him.  Luckily, Kitty stops her before she can kill him and her future mind is transferred back to the unknown future. And the book ends with the question of did they really change the future. 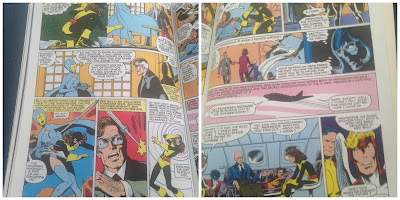 That's how it ends.  A 2 issue classic that 30 plus years later is made into a movie.  There are many similarities between the book and the movie.  When Big Hutch and I heard they were adapting this story into a movie, we were very nervous that they were gonna screw up the canon of this story and ruin it for future generations.  But Singer and company did a great job.  I feel Days of Future Past is the best of the Xmen movies and it gives me hope that they wont screw up Age of Apocalypse( which is not even close to being held in the esteem that Days of Future Past is).

Hope you enjoyed the review.  You can get the trade paperback at your local comic book store if you want to read it in full.  Or if you got that kinda money, buy the originals and donate to brothascomics while you are at it!