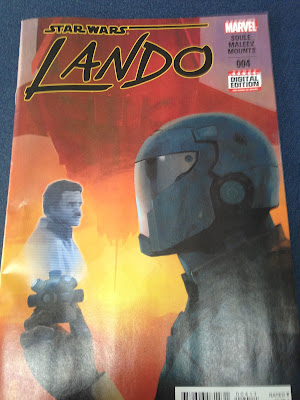 I was so disappointed in issue number 4 and it reflected in my review.  The book had too many splash pages and hardly any dialogue and did very little to advance the story line.  I am happy to report that issue five does not suffer through the same disappointments.

To recap, Lando, our lovable playa/hustler has gotten himself in deep with a loanshark and he has been doing odd jobs to pay down that debt.  Of course there is no honor among thieves and when Lando thinks he has his debt paid, he is blackmailed into "one more job".  Lando, with his faithful male servant, Lobot, two assassin twins, and a curator of artifacts, named set off to steal a ship, the Imperialis.  Once they steal the ship, they are immediately tracked by the Empire and narrowly escape being captured.  Meanwhile, unbeknownst to Lando, the ship they stole belonged to Emperor Palpatine himself and he has every intention of getting it back.  Palpatine dispatches his personal bounty hunter, Chanath Cha to get the ship back by any means necessary.  Meanwhile on the ship, Lando and his crew, while exploring discover a hidden area guarded by the Emperors Imperial Guard and a massive battle takes place between the twins and the guards.  Once the guards are defeated, Lando and Sava  move into the treasure room and discover that the room is full of artifacts from the Sith.

Issue 5 picks outside the Imperialis as Chanath Cha has made his way to the ship and sneaks on board and begins his search for the thieves.  The ironic moment occurs when he need Chanath needs to get on the ship, the access code is 66( Emperor was dropping that code for the longest). 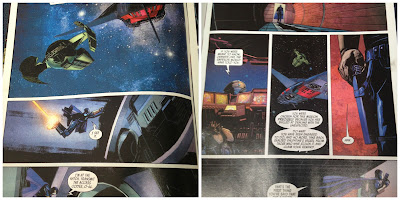 Back in the treasure room, Lando wants to know how much all this Sith stuff is worth.  He figures they take it, find a collector, and sell it for credits.  He asks Sava Korin how many credits could they get and Sava says they could  earn  credits to buy a moon, or two( Lando would call his Lando Land). 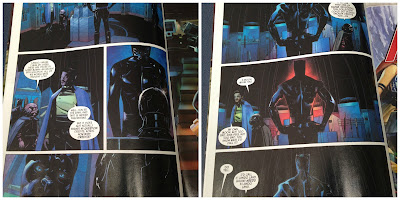 While Sava and Lando discuss credits and Jedi and Sith history( Lando is not a believer), one of the twins becmes fixated on the Sith artifacts and picks up a double bladed lightsaber.  It seems being in the room with the Dark Side of the Force and fighting the Emperors Imperial Guard has affected the twin and he goes Tatooine Cantina on the other twin with the lightsaber.  This freaks out Lando and Sava and they lock the twins in the treasure room with one another. 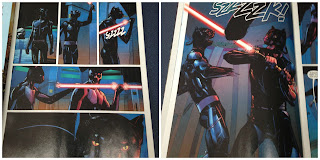 Lando, showing a sense of caring and loyalty that Sava has never seen before, wants to figure out a way to rescue the twins.  Sava, thinking Lando is the Lando she has known forever, is headed to an escape pod until an announcement comes over the speaker system on the ship stating that all escape pods have been disabled( by Channath Cha)

Back in the treasure room, we learn that the assassin twins are actually a couple and that one is male and one is female and they are married and they are looking to adopt a child with the money from this job but being in this room has opened new thoughts of the future as they are exposed to the Dark Side  of the Force in the room. 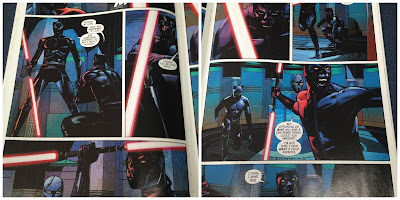 Lando and Sava debate on what to do. Sava knows the ship has been taken over by an outsider and still makes an attempt to escape before being captured off panel by Chanath.  She tries to say she stole ship alone but the Bounty Hunter is not buying it and Lando's attempt to rescue Sava goes as well as one might think. But once Chanath gets the drop on Lando, the bounty hunter makes a connection with our lovable, playa/hustler 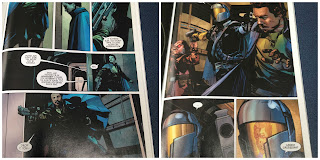 Turns out Chanath is a lady and someone who Lando has had a previous relationship with( best part is that it takes a comic panel for Lando to realize who she is).  She drops knowledge on Lando and Sava that this is the Emperors ship and he wants it back and she has been charged with killing everyone on the ship.  The book ends, tho with both twins wielding lightsabers ready to kill Lando and anyone else on the ship. 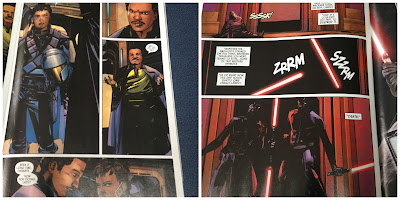 That concludes issues 5.  The book got back on track this month.  Issue 4 worried me that there was a lack of conclusion to this story arc but this issue got the book back on track.  Its so funny that Lando's past of promiscuity rescued him certain death.  The book has had shipping issues already but the conclusion to this arc should end with issue 6 before a new creative team takes over the book.

Posted by Brothascomics at 3:53 PM