Days of Future Past: A comic review part 1

We live tweeted the Xmen the Animated series version of this classic storyline and we are huge fans of the movie adaptation.  This post will examine the comic that spawned them both.  What alot of comic book fans and casual movies fans don't realize is that this classic story came out of nowhere and at the time, no one reading it thought this was an instant classic.

To set it up, the Xmen are reeling from the death of Jean Grey/Phoenix and Cyclops, devastated by the death of his teammate and his lover, has left the team and now Storm is the leader of the Xmen.

With the lack of a female character in the book, the creators, John Byrne and Chris Claremont introduce a new character to the team- Kitty Pryde aka Ariel, AKA Sprite, AKA annoying as fuck( to me at least).  Kitty represented a new addition to the team and her mutant ability to "phase" and her mensa like mind, her sudden and immediate attraction to Colossus, her fear of Wolverine, and her constant mothering by Storm are consistent themes that will run through Kitty's first 20 issues as an Xmen.  But leading up to Days of Future Past, there is no indication by the previous issues of what is coming.  139 introduced Kitty to the team and 140 is an Wolverine and Nightcrawler story with Alpha Flight fighting Wendigo. We do get Wolverine's first appearance in that sweet as brown uniform tho!

And that leads us to Days of Future Past, part 1: Issue 141. A little backstory on this personally from brothascomics.  At the time these first came out, Big Hutch had a subscription from Marvel to the Xmen.  The books would come once a month and be placed in our mailbox at the house in a brown, wraparound and folded ever so slightly down the middle to fit in our mailbox so even if we had kept them in the best condition, they still would've been slightly damaged just from how Marvel shipped them back then.  Secondly, we did not know how to bag and board books at the time, so even tho we have the originals to this classic and other Xmen classics, they are so beat up.  The moral of this story kids, buy your books at your local comic book store, read it, bag/board it, and store it in a nice long box in a cool room inside your house.  And if the book looks to be trending up, get it CGC graded and packed and never touch/read it ever again until you are ready to sell it!

Once again, this book comes out of nowhere based on what is happening with the Xmen.  The cover is outstanding and you immediately know that many of the Xmen are dead and you don't know how this happened and where this is coming from because last issue ended with Wendigo!  The book begins with a desolate looking future and a mature Katherine Pryde now as she is carrying a package in , what looks to be a prison jumpsuit, through a shady looking neighborhood that is NYC but desolate.  Kitty explains to us( in thought boxes which are employed by Chris Claremont by the thousands) that she is rendezvousing with Wolverine but she is startled and accosted by a group of thugs who look to do her harm before Logan arrives to save the day.  The collar around Kitty's neck does not allow for her to use her mutant powers. 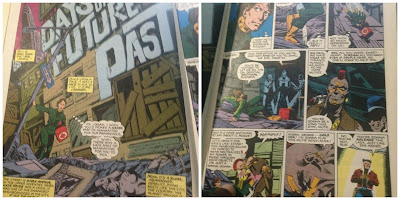 With the villains dispatched and Wolverine given Kitty information for her to continue her trip, Kitty comes to the Mutant Concentration Camp.  The camp is run by Sentinels and Kitty must check in before she is allowed to continue into the camp. On her way through, she sees the graves of many former Xmen and other super powered humans who have died in this new world order. Kitty meets up with the other captured members of the Xmen.  A wheel chair bound Magneto, Storm, Colossus, Franklin Richards( who is a mutant BTW), and Rachel,( although not called Rachel Summers here, she is the daughter of Cyclops and Jean Grey) a telepath, who is key to a plan the Xmen have to save the world from this future timeline. 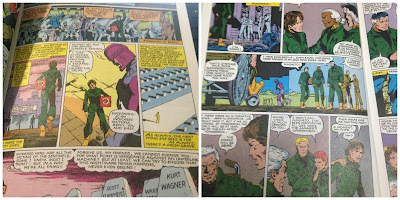 The plan, very similar to the plan in the Days of Future Past movie, is to send the mind of an Xman back in time( Kitty) to prevent the assassination of a key government figure.  In the movie, it was Bolivar Trask, in the books, its Senator Robert Kelly.  The thought being if they can prevent the assassination, this bleak future timeline could be avoided. So Rachel sends Kitty's mind back and it merges with young Kitty while she is finishing a training session in the Danger Room. Of course "mom" Storm and boo Colossus freak out! 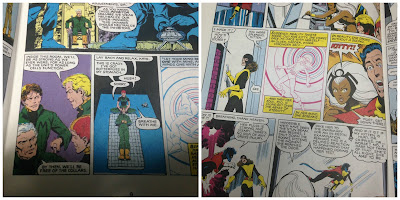 Once they determine Kitty is okay, the more mature Kitty tells them about the future she comes from.  She is so shocked and happy to see her friends alive again.  She has to convince them she is from the future and that they need to believe her.  She tells them if they do not stop the assassination of Senator Kelly, the Mutant Registration Act will pass and the Sentinels will eventually take over the world. 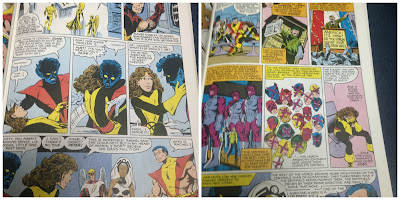 Meanwhile in the future, the Sentinels have sniffed out the Xmen and their little plan and move in to terminate.  Franklin Richards gets it first, once again proving he is useless.  The remaining Xmen take out the Sentinels and we get the famed "fast ball special" with Colossus tossing Wolverine at the Sentinel( wont work 2nd time-SPOILER ALERT)! 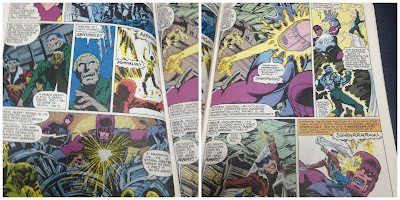 Meanwhile, back in the present, the Brotherhood of Evil Mutants, now led by Mystique, and counting amongst their members, Blob, Pyro, Avalanche, and the pre-cog Destiny, are in DC plotting their attack on Senator Kelly. Of course before anything can happen, the Xmen arrive on the scene which ends issue 141. 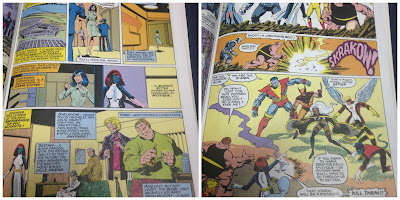 By the way, the artwork by Byrne and Austin in these books are beautiful. The details on each page and Byrne's ability to match art with plot is truly remarkable.  Their run on Xmen is truly breathtaking.
This ends part 1, be on the lookout for part 2- Issue 142!

Posted by Brothascomics at 12:59 AM