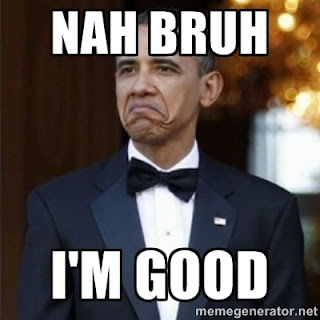 Of all the different genres of film, the one I do not mess with at all( anymore) is horror! I know some people love watching those movies and like to get scared, but I don't fuck with it anymore! It started early for me watching black and white movies of the Creature from the Black Lagoon( why the lagoon gotta be black?) and extended all the way through Freddy, Jason, Mike Meyers, and them Scream movies! I've never had the stomach for it, yet when I was younger, I kept getting pulled into or forced into watching them and then being terrorized with fear for months trying to get what I saw out of my head! Ima  keep it 100, I slept with lights on, with knives under the covers, or with my mom after some of these joints! So when I see these  new movies about to come out in the fall around Halloween, it always brings back them creepy feelings! I'ma share with you some of my favorite" I don't fuck with that horror movie" moments!  So turn on your night light, get yo knife , and get in bed with your mom cuz Ima about to scare you and myself.

In order of age when I saw it!

The Birds and Psycho 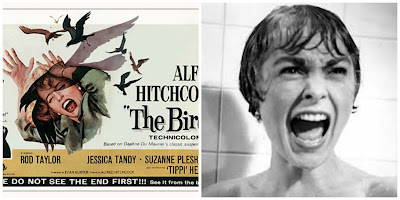 I was around 8 when I saw these movies! In our hometown, Channel 2 always played a Sunday afternoon movie and these 2 movies were played frequently! Plus my mom loved these movies and would watch them whenever they was on. These movie put me off birds and showering (not that the shower worked in our house)! Even today, the butt hole still gets tight when I see flocks of birds or rickety houses with stairs leading to them.

Carrie
I was around 8 or 9 when I saw this, too.  If you have never seen the original, its so fucked up on so many levels. The powers, the abuse, the teasing from her classmates. The pulled a Colombine with her powers at the prom scene near the end! The movie is brutal and at the end( spoiler alert) at her grave site made me pee myself a little bit!

Jaws
This movie came out when I was 7 but I did  not see it until I was 9 or on Showtime! Man, listen! I posted this picture today on our Facebook page and this is a legit, irrational fear black people have about the water. 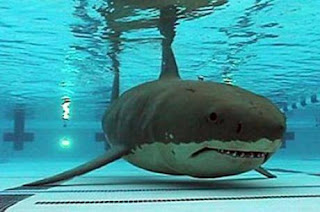 Straight up, I was afraid to take baths after seeing this movie because I was convinced a shark was gonna come out of the faucet if the tub water got too high.  I was bathing in like 2 cups of water!  Now its funny because I have kids who love the ocean and I get in the water with them all the time to surf or boogie board.  But I don't go in past my waist and if I can't see in the water or feel something swim past my legs, I break the fuck out!  That's why I thought these people was pure crazy watching Jaws while IN THE WATER!  Look closely because there are no black folks there! 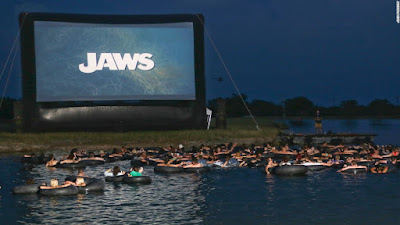 Salem's Lot
I got sucked into this movie because the dude who played Hutch on Starksy and Hutch was the star.  If you don't know about this movie, then stay ignorant to it because its messed up and was made when vampires wasn't trying to be cute. These Vampires suck in this movie and the main one is scary as hell.  Our family was actually on a mini family reunion in Detroit when this movie came out.  We had grandparents, moms, dads, uncles, aunts, and cousins all over my uncles house. For some reason, our family decided that it would be okay for even the little people to watch this movie.  So Big Hutch and I, who were both under 12, and about 8 or so cousins who were barely over 12, was watching this movie with our family and our uncle traumatized us for years by sneaking out and enacting a scene from the movie and scared the hell out of everyone in the house.  People was jumping chairs and tables.  There was real tears shed that night and not just by children. 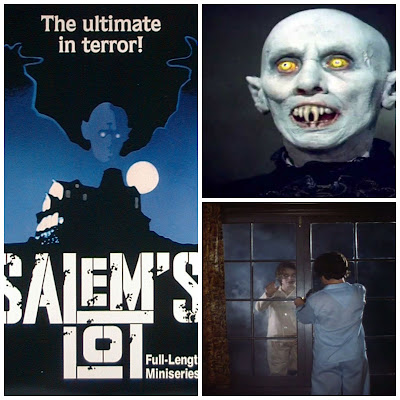 The Shining
I saw this on Showtime also and apparently Showtime liked to scare the hell out of little kids!  The movie came out in 1980, but I probably saw it when I was 12 tho.  I did not understand the movie then and even when I saw it later in life, I still didn't really understand it.  All I know is them twin little girls was freaks, blood was flowing in hallways, REDRUM, and Scatman Crothers played the role of "only black guy in the film will get killed"! 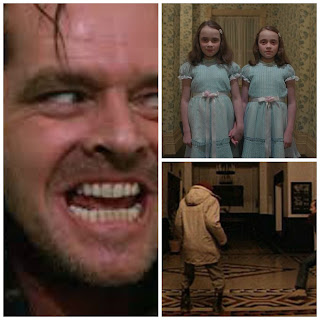 Friday the 13th
I saw these movies kinda on a dare.  First one came out in 1980 but I saw it when I was 13-once again on Showtime.  The first one is probably the scariest to me, along with the 3rd one.  I mean brothas don't mess with hockey anyway, so seeing Jason( or his mom) hacking people up in that hockey mask didn't do it for me.  As I was a teenager now, I did like these movies because you knew at some point you was gonna see some breasts- so that helped.  The movies got more ridiculous as they went on and you would think that would make it easier for me to watch, but no. My funniest Friday the 13th story is when Brother Beavis' brother got high and watched all the movies up to that point and detailed name and method of death for each character in the movies.  The 3D one messed me up good when Jason popped out of that lake at the end- Fuck the world for me!  When I did finally do a sleep away camp in my 20's as a camp counselor, I did not get on that lake in the daylight, let alone at night.  I also did not smash a counselor which mean movies are bullshit!

Halloween
Now I had a girl that I liked, whose family was friendly with my family, and when our families got together, the kids would all go in the basement to watch a movie.  One time, that movie was Halloween.  Now I really liked this girl.  A crush that would make her my "out of town" girlfriend, a crush that extended into high school, college, and beyond.  So if she asked me to sit with her on a futon and hold my hand to watch Halloween, DAMNIT, I was doing it! What she didn't know, or maybe she did, I was terrified and made her big brother walk me to the bathroom in their dark basement thinking this masked ninja might jump out and kill me.  This girl had me tho and even convinced me to watch Halloween 2 and 3.  I was 13-14 at the time and this movie ruined Halloween for me-to this day.  Even now when I take my kids out for Trick or Treat, the sight of any one in cos play as Mike Meyers makes me do a double take or makes me cross the street. 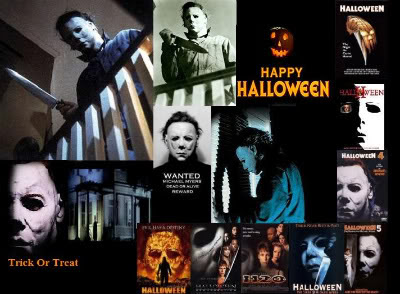 Texas Chainsaw Massacre
It was only held twice, but Big Hutch and I hosted a Vulture Party- basically alot of our neighborhood friends would come over and we would have a sleepover in our basement.  We would play games, wrestle, and just hang out.  Part of that hanging out, besides eating pizza, was my mom would rent a VCR( that ought to tell you how long ago this was), and we would watch a movie. One year, the movie was Texas Chainsaw Massacre( the original).  The movie is more creepy, than it is scary in parts.  But Leather Face is wearing the skin of his victims AND this shit was supposedly a true story so 13 year old me was quite frightened by this.  Best thing was that I had all my friends there and maybe he would kill them before he could kill me.  I think we rewinded the scene wear Leatherface pounds dude into the ground from the freezer about a thousand times.

Nightmare on Elm Street
This one pretty much put me off horror for the rest of the 80's.  I mean I would see some sequels to Friday the 13th here and there, but the original Nightmare probably did more psychological damage to me than any other movie.  Just writing this now at 11:00 PM, I am getting queasy about posting the pictures and even more queasy about going to sleep.  Our friend Gary had a video copy of the movie and he and Big Hutch must have left it at the house and me, thinking Ima bad ass( to watch it during the daytime mind you) watched it.  That was a mistake.  A huge mistake.  The movie is brilliant in its execution literally and figuratively.  The idea that a ninja can kill you while you sleeping was terrifying to me and lightweight still is.  I got through some of the movie alone( until the scene where his arms are long chasing that girl down the alley).
I stopped the tape and waited for my brother and Gary to get home and then I watched the rest with them.   That scene at the end where he pulls the mom through the door- yeah, maybe its not a dream and its real?! Check please!  I was pretending I wasn't scared, but I was petrified! For the next month, maybe longer, I was sleeping with my mom. 4 real! I was like 15 years old... In the bed with my momma.  And when she got sick of my ass and sent me to my dark, attic enclosed bedroom upstairs, I was sleeping with the lights on. My grandmother would hit the switch and turn off light at night( You wasting electricity) and I would wake up,  panic stricken tyring to get to that light switch.  And I had all them nightmares with Freddy too.  Pretty much every scene in that movie, Freddy tried to get my ass in a dream.  Its a wonder I was not wearing pull ups at night for fear of pissing myself.  And kids can be cruel when they know you scared and being a teenager and not wanting to show I was a bitch, I saw the sequels- at least through the 3rd one-which is pretty fucking scary.  But that was it for me seeing horror movies in the 80's.  I was scared straight.  Whenever people was like "we going to see_______" I'd make up an excuse and not go so I wouldn't  have to see it and then sleep with my mom for a few days.  Side Nightmare note- the last dream I had about Freddy, I was in my bedroom upstairs and feel asleep and of course Freddy came after me but when he was trying to take me out, all the professional wrestlers on my posters came alive and beat him up. Man Sting, Lex Luger, the Rock and Roll Express beat Freddy's ass for me.

That's part 1.  Sadly, like a dumbass, I didn't learn much from the 80's and kept allowing girls to pull me into these movies and wound up having to puff my chest out and see these movies on dates and be thinking, " I wonder if I can get her to stay over but sleep with the lights on?'
Part 2 coming soon!

The Producer
Podcast on Soundcloud
ITunes Podcast
Follow us on Twitter
https://www.facebook.com/brothas.hutchinson
Posted by Brothascomics at 11:34 AM