The Dusty Finish with the X-Men and Batman 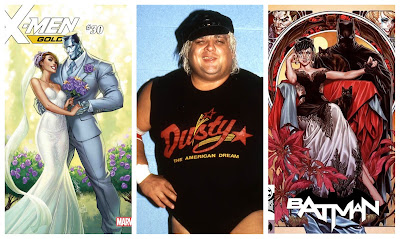 Before we get started, I guess I need to explain the Dusty Finish.  Now, we @brothascomics have varied interests beyond comic books.  One of our guilty geek pleasures is professional wrestling.  We watched it as kids, grew up on it, and watched it into our adulthood.  We loved the NWA and WCW and spent many days watching TBS on Saturday mornings and Saturday nights.  We loved the Road Warriors, the Rock and Roll Express, Magnum TA,  The American Dream Dusty Rhodes, and of course The Nature Boy Ric Flair! Whooooo! 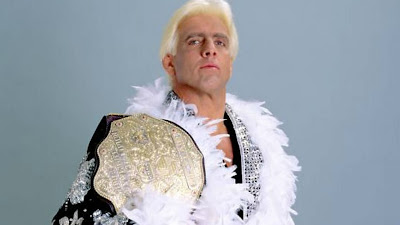 Now we enjoyed wrestling at a time where fans didn't know any of the inside lingo brought about by the Monday Night Wars and the explosion of internet wrestling fans.  There was no smark community in the 80's and fans didn't know anything about a work, cutting a promo, heat, pops( cheap pops), and wrestlers going kayfab.  This was unknown to wrestling fans back in the day and may be unknown to you as you are reading this.  But don't worry, The Producer will explain it all before we are finished( look for wrestling terms in blue)  Or you can listen to the Legend Jim Cornette explain the Dusty Finish

One of those wrestling terms that came out of the phenomenon of internet wrestling fans was who was holding the book- a common term for the person back stage who is booking the matches. Back in the mid to late 80's of NWA/WCW, Dusty Rhodes held the Book  and scheduled and planned matches, feuds, and determined who was gonna go over( win)  and who would be champion. The problem was that Dusty was also an active wrestler and having him book his own matches often created a major conflict of interest with the boys in the back( the wrestlers). Now Dusty was known to be smart and put the business( wrestling) over his own personal interests as a wrestler.  However,  often times when Dusty was wrestling, he would get himself over( loved or hated by the fans) by booking a screw job finish to the match.  The ref would get knocked out, there would be a phantom 3 count,  a wacky DQ or count out finish.... all of these were affectionately named a Dusty Finish as they occurred often when Dusty had the book.  The match would set up one way, end with the screwjob ending,  and the fans don't get what they expected.  The Dusty Finish was a classic way to get heat for the heel( anger for the bad guy in the match) or a way to get a pop/cheap pop( cheers) for the babyface( good guy).  Regardless, often times fans left the arena angry because of the Dusty Finish, but came back next week to see how this goofy situation would resolve itself.

Well, Marvel and DC set their fans up for many months with a classic Dusty Finish.  For many months, Marvel had teased the marriage of long time X-Men teammates Kitty Pryde and Colossus.  This would be the conclusion of a thirty-plus year relationship interrupted by other love interests, cheating hearts, marriages, divorce, and even death.  Regardless, Marvel for many issues, pushed this engagement and by the time we got to issue #30 of X-Men Gold, we were all primed for their marriage!  We get guest appearances by long time characters important in their history and even Wolverine shows up( which one- IDK).  Everything is looking kosher....... until we get the Dusty Finish as Kitty gets cold feet after a conversation with her best friend Illyana and she pulls a runaway bride leaving me and many other fans in the dark as to why set fans up for this event, promote it for several months, and get all the cheap pops that came with it- just to throw it away with  a Dusty Finish?  And X-Men Gold doubled down with the Dusty Finish by then marrying off two other characters( Double Dusty) 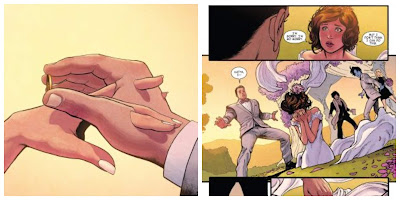 DC, in their own right, had a hold my beer moment after the news of Kitty and Peter broke.  For many months and issues and mainstream press, the proposal and upcoming marriage between Batman and Catwoman was promoted everywhere.  Comic shops, on EW, The Today Show, and even the New York Times spoke of the marriage to be in Batman #50.  DC took all the pops/cheap pops over the months moving forward this storyline! It seemed like a great move as Batman is the flagship character for DC and Bruce Wayne getting married to Catwoman is every Bat fanboy fantasy! 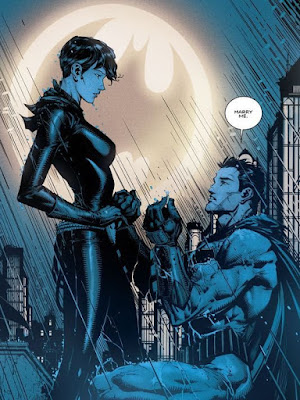 Alas, Bruce and Selena were not to be.  The New York Times spoiled the nuptials as Bruce and Selena do not wind up getting married.  The reason why is a pure "Because Comics" moment and now DC is getting heat from fans who bought into this engagement with their time, money, and emotions to get screwed by a Dusty Finish (and allegedly Batman #50 also has a Double Dusty Finish)!

This may not seem like a big deal, but to me, it is.  Comics from the Big Two have a trust issue with readers in providing content that is meaningful and not just events to get fans to buy the books.  And where the event itself may be cool for comic fans to see, these events often don't have any long lasting effects to the characters continuity.  Characters move from one world changing event to the next with no real emotional attachment to the event.  And this spreads to the readers and fans. Why should I make an emotional and financial investment into these characters when the company wont do the same? The company's are living on cheap heat and cheap pops to build interest, but eventually let the fans down by copping out at the end.  And even tho this is not a new tactic in comics, each time its done, it erodes more and more trust with the comics and retires long time readers of the books.

I was looking forward to reviewing Batman #50!  It will lead off the season premiere of The Marvel Hacks Season 4!  We recorded our podcast of X-Men Gold 30 on the Marvel Hack sand you can listen to that right here.

Here's to the next Dusty Finish- I am sure its right around the corner!

Posted by Brothascomics at 5:02 PM