Trailers Before Antman and The Wasp 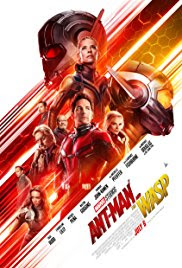 Just got out of Ant-Man and the Wasp and the movie is good fun and a much needed break from the downer ending of Infinity War.  But before the movie got started, we got a few trailers and we'll break them down for you right here. First up...

They have really been pushing this movie.  Possibly because of all the real life stunts and injuries Tom Cruise suffered. Perhaps its because Henry Cavill's beard was better than Justice League or maybe because this is Tom Cruise's only viable movie option since he became a grade A weirdo.
Regardless. the movie look great.  Cruise has owned this role like Downey did Tony Stark and both should milk every dollar possible.  I am much more interested in the relationship between Angela Bassett and Cavill than anything Ethan Hunt does.  Will definitely see this one when it comes out!!

The Spy Who Dumped Me

When this came on, I really thought it was a promo for Bad Moms 3.  I used to enjoy Mila Kunis but that infatuation wore off probably around the Book of Eli. This movie looks like silly fun- which we all could use more of and I am a big supporter of female led anything.  But it also looks like a paint by numbers, fish out of water movie and after seeing the trailer, I think Melissa Mccarthy made this movie a few years ago called Spy so Ima pass on this one and catch it on Redbox of the Firestick


I had to LOL at the title of this movie and the premise is just as laughable.  Its the story of a lost AI dog found by a teenager with the government and its creators hunting it down.  Its ET and the first Transformers movie all rolled into a mash up no one asked for.  It even has the cute/sexy brunette playing opposite of the lead.  This is a movie not made for people my age so its a big fat no for me unless my kids force me to take them to see it!

The House with a Clock in its Walls


I had no idea what this movie was about until  my 11 year old daughter told me it was based on a book.  When I first saw Jack Black I thought it was the Goosebumps sequel we were promised. But alas, it was not.  I am all for books being turned into movies; although each year the adaptations seem to get younger and I get older.  I will see this movie even though me and Jack Black are not movie friends.  My daughter will force me to see it and I cannot say no to her. I do love Cate Blanchett tho so all is not lost!


I put this out to my closest group of friends and Ima say it to you, too.  If you see this movie IN the movie theater- meaning you paid real ass money for tickets, popcorn, candy, soda, etc... we cannot be friends anymore.  Look, movies like Sharknado have a place and that place is on tv and watching it in your house for free.  To go out and pay money for this- that's just damn irresponsible.  It looks dumb and I'm sure it is dumb.  The hardest of all passes!


The Nutcracker and the Four Realms


Damn my daughter is going to get me again. I have sat through ballets of the Nutcracker and through the Barbie version with my daughter.  This idea of expanding the story out kinda makes me a little uneasy and they are going with the Black guy being the hand servant of the star which is a tired ass movie trope. But yay... Kiera Knighley?  I don't know.  I will be forced to see it because  I cannot say no to my daughter in this situation so sign me up and take my money!


I don't mess with Tim Burton- mostly because, as Brother Beavis has said, he cannot do anything but make a Tim Burton movie.  Disney live action remakes have been solid, but Dumbo is kinda racist as f@ck with them damn crows so its not on my list of Disney movies to watch.  I am curious as to how they handle that issue- especially since the director has a touchy history of casting Black folks as caricatures in his movies.  It's a hard no from me!!

Was hoping for the Captain Marvel trailer but it never happened.  Let me know what movies you are looking forward to seeing in the comments section!

Posted by Brothascomics at 3:24 PM